Guardian Angel– a messenger of God, it’s the angel  assigned for a particular person to protect, guide and guard, the concept of tutelary angels and their hierarchy was extensively developed in Christianity in the 5th century by Pseudo- Dionysius the Areopagite. It’s state in the New Testaments that Angels are everywhere, they are the intermediaries between God and man and even little children have Guardian Angels.

Christian Prayer for the Guardian Angels:

Angel of God, my guardian dear

to whom God’s love commits me here

every each day/night be at my side

to light, to guard, to rule and guide.

Who is you Guardian Angel?

Find out the name of your Guardian Angel.

We have 7 seven Angels assigned for each day

1. St. Michael– Sunday = is the Commander-in-Chief of all the hierarchies of the Heavenly Hosts. His name was the war-cry of  the good angels in the battle fought in heaven against the  enemy and his followers that defeated Lucifer.  He is the first defender of the Blessed Virgin Mary in the Mystery of the Incarnation. He is usually associated with the miracles manifesting the almighty power of God with the Blessed Virgin Mary.

2.St. Gabriel– Monday = He is the bearer of God’s secret messages to His chosen ones. he was the angel who appeared to Zachariah to announce the birth of St John the Baptist. Finally, he announced to Mama Mary that she would bear a Son Who would be conceived of the Holy Spirit, Son of the Most High, and Saviour of the world. 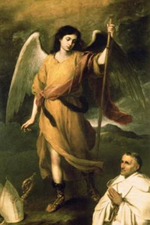 3. St Raphael– Tuesday = Raphael’s name means “God heals.” This identity cam e about because of the biblical story which claims that he “healed” the earth when it was defiled by the sins of the fallen angels in the apocryphal book of Enoch. He is the Archangel of the Christian’s journey to heaven. He is assigned by God to accompany us along the way of our pilgrimage in search of the treasures of real happiness which God has in store for all His children.

4. St. Uriel– Wednesday = Uriel means “Fire of God“.  He is shown with open hand holding a flame. The open arms signifies  the openness to receive God‘s light, the fire inside his palm is a reminder of intensity of reception of this light. with the weighing scale in his hand, reminds us of divine justice that weighs according to its true worth whatever good we do and whatever doings we commit in relation to God, to our neighbors or to ourselves, both as individuals and as a community of nations.

5. St Sealtiel– Thursday=  also known as St Selaphiel, his name means “Prayer of God” . He is known as Archangel of Worship and Contemplation. It is the Archangel of those born on Thursday. He  continually stands before God, with incenser in hand in unceasing adoration of the Most Holy Trinity. As the Archangel of contemplation and worship, his angelic purity transforms the love and worship which we mortals give to God.

6. St Jhudiel– Friday=  also known as St. Jegudiel, He is the “Bearer Of God’s Merciful Love”.He dispenser of God’s eternal and abundant mercy. He is the patron of all who work in some field of endeavor, and the crown he holds symbolizes the reward for successful spiritual labors. St Jehudiel is usually depicted with a flaming heart or the Sacred heart in hand. St. Jhudiel is invoked by confessors, social workers.

7. St. Barachiel– Saturday= is the Archangel who was assigned by God to keep watch over His adopted children, taking care that He and the Choirs of Angels assigned to the task guard these transformed souls in all their ways, bearing them up in their hands, “lest they dash their feet against the stone on their way to their heavenly home. He is depicted holding a bread basket.