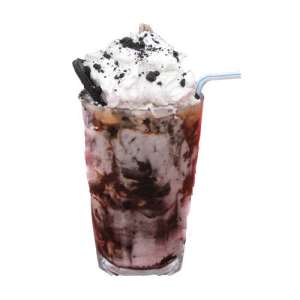 Want to get delighted with the enticing creamyfull-milkylicious soothing satisfying taste? That’s Cookies and Creme shake can offer, it’s an ice-cream, cookies and milkshake flavour all-in-one. It’s quick and easy to prepare refreshment. That you can try anytime all-the time that I’m sure you and your guest would truly like to indulge. Dont miss this free chance to get entice and mesmerize.
Recipe below.

Let me give you a few trivia about cookies and cream flavour. In 1983 it became the Top 5 best seller Ice Cream Flavour. The appearance of numerous claimants tugging for whom started the flavour of cookies and cream was still obscured and it set numbers of arguements and debates that never ceased yet. John Harrison, claims that he invented the flavour for the Dreyer’s/ Edy’s Ice cream in the year 1982, Whilst Blue Bell Creameries claim to be the first one pioneer the flavour and the first one to mass-produce it two years ahead of the Dreyer’s/ Edy’s Ice cream. It was documented that Blue Bell Creameries trademarked the name “Cookies and Cream” in 1978. Thus, Steve Herr of Massachusetts’ Herrell’s Ice Cream claim the honor lastly the South Dakota States University claim the flavour was invented in the University’s dairy Plant.

Preparation:
Combine the ice cubes, ice cream, cookies and milk in the blender or mixer, mix well until the texture become smoothen and creamy. Then it’s ready to served cold.
Cheers!